Born at Harrow, Middlesex, England on 27th July 1744. Served in the British army in the Seven Years’ War, in the American Revolutionary War, and in the wars of the French Revolution.

Appointed Governor of Limerick in 1794, and became Commander of the Forces in Ulster in 1796.

Early in 1797 set about disarming Ulster and destroying the United Irishmen organisation there. Lake was unhappy with this appointment, fearing, “the wrath of an embittered and exasperated people”. This did not prevent him carrying out his task with brutal efficiency. In April 1798, Lake was appointed Commander-in-Chief of the Crown forces in Ireland, replacing Sir Ralph Abercromby.

Lake moved quickly to put down the rebellion as soon as it broke out in the midlands. He then concentrated his campaign in Wexford and was active in the defeat of the insurgents at the battle of Vinegar Hill on 21st June. He was also present when the French forces under General Humbert surrendered at Ballinamuck on 8th September.

After the rebellion, Lake was installed as M.P. for Armagh but resigned in 1799. In 1800 he was made Commander-in-Chief in India and set about modernising the Indian Army. He became a full general the following year and, after a successful campaign against Indian dissidents, he was created a Baron in 1804.

In 1805 he was removed from his command, and returned to England where he was made a Viscount in 1807. 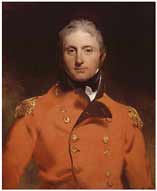 Moore became an M.P. in 1784 and obtained a command in the British army when war broke out between France and Britain in 1793.

General Moore was Commander-in-Chief of Government forces at Lacken Hill, Goff’s Bridge and Wexford town, defeating 5,000 insurgents lead by Fr. Philip Roche at Goff’s Bridge and Foulksmills on 20th June 1798. This victory was later attributed to the fact that the military had artillery and because of General Moore’s commanding ability.

He was considered very humane by the Wexford insurgents, and is remembered as a soldier who carried out his duties without malice. However, he failed to control his Yeomanry and Hessian units and they committed many atrocities.

Moore was killed at La Coruna, Spain fighting against Napoleon’s army in the Peninsular War in 1808.

A poem entitled “The Burial of Sir John Moore” was written by Charles Wolfe to commemorate his death.

Born in Menstrie, Clackmannanshire, Scotland on 7th October 1734. He was a soldier and a politician.

Abercromby rose to the rank of Lieutenant-general in the British Army and served in the Napoleonic War and was Commander and Chief in Ireland for a time, before General Gerard Lake took over.

He served as MP of Clackmannanshire twice and also was appointed Governor of Trinidad. It is noted that he took part in the Seven Years War, the Battle of San Juan, the Anglo-Russian Invasion of Holland, French campaign of Egypt and Syria and the Battle of Alexandria.

He was bistowed the honour of KCB, also known as Order of the Bath or Knights of the Bath. This award would be rewarded to members of either the Civil of Military Division.

Abercromby was killed at Alexandria, after being struck by a spent ball; which could not be extracted and died seven days later abroad the HMS Foudroyant.

Was the third son of John Needham. He joined the British Army in 1762 and took part in the American War of Independence and where he was taken prisoner at the Battle of Yorktown.

He also fought during, the French War of Independence and the Irish Rebellion of 1798. He was promoted to Colonel of the 86th Foot and to General in 1812.

He went on to represent Newry in the House of Commons.

General Sir Loftus William Otway, CB was an experienced and professional cavalry commander of British forces during the Peninsula War who saw extensive service under Sir John Moore in the Corunna Campaign and Wellington in the remainder of the campaign. He also worked training Portuguese troops and spent time serving in Ireland during the 1798 Rebellion and Canada. Otway retired after the Peninsula War and was honoured several times for his war service by both the British and Spanish royal families.

General Sir James Duff was a British Army officer who fought during the Napoelionic wars and was a Member of Parliament. During this time, he rose up through the ranks to become a major general. In 1797, he received the command of the Limerick district.

Born in 1735 in Edinburgh, Kingdom of Great Britain. Sir David Dundas was a General who took part in the Seven Years War and the French Revolutionary War.

He wrote important texts which include: the Principles of Military Movements. He rose up through the ranks in the British Army and was eventually appointed to Quartermaster-general in Ireland in 1777.

Dundas was Governor of the Royal Hospital of Chelsea from 3rd April 1804, until his death. He died there on 18 February 1820 and is buried on the grounds.